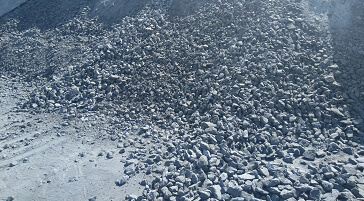 Normally, 10 to 15 kg of used cathode carbon block is approximately produced through the production of 1 t of primary aluminum. The used cathode carbon block mainly consists of carbon, in which the fixed carbon content ranges from 65% – 85%. According to the positions of the electrolytic cell, there is difference in the content of each component. Since its composition contains certain amount of fluoride and cyanide, which are controlled in most of countries in the world and the environment permit shall be required and obtained for import and export. Our company has already obtained the Environmental Permit for its port of departure.

The comprehensive utilization of aluminum cell used cathode carbon block is not only concerning resource recovery but also required in terms of environmental protection. The main principle for the disposal of used cathode carbon blocks is hazard free on one hand and being recycled on the other. To sum up, there are three main aspects, including carbon recycle, electrolyte recycle and cyanide disposal. Some simple applications are recommended as follow:

Substitute of fuel and fluorite in blast furnace

At present, in the steel industry, limestone and fluorite are required to be used as fluxes, the function of which is to lower the melting point and viscosity of the slag. The carbon in the used lining can be exactly adopted as fuel to replace metallurgical coke. Fluorides can also be used as a flux to replace fluorite. Therefore, the used cathode carbon block is skillfully used as an additive, which kills two birds with one stone.

Profile carbon block at the side of aluminum electrolytic cell.

During the production and operation of the aluminum electrolytic cell, the side and periphery of the cell requires larger specific resistance (for reducing horizontal current and increasing cathode-current density), good abrasion resistance (capable of withstanding the scrubbing impact of acidic electrolyte), and moderate thermal conductivity (for thermal insulation and dissipation as well as maintaining heat balance), as well as low expansion rate (to reduce the early damage rate of the carbon block at the side caused by sodium absorption).

Due to its high graphitization and sodium absorption saturation as well as its relatively high ash content, infiltrating certain amount (30-50%) of the used cathode can produce the carbon block profile at the side which has the characteristics of semi-graphitic carbon block, namely, larger specific resistance, good abrasion resistance and low sodium expansion rate and so on.