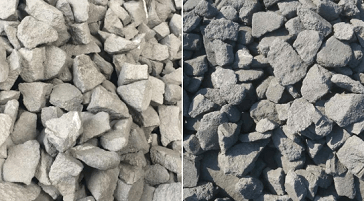 So It has a great influence how to clean up and store these scrap, Beside hands,The scrap is generally sold as fuel when An aluminum plant without a matching carbon anode roduction line.It can be used with the foundry coke in the blast furnace and the furnace.Because of high fixed carbon content, high calorific value and low ash content.Of course, sulfur content of these scrap is usually 2-4 times as much as that of the coke, in order to control the emission of sulfur dioxide in the smelting process.Usually the people will control proportion of scrap when it used together with foundry coke.

as a fuel in the smelting of copper and aluminum or in the casting of raw iron,besides quality indicators such as fixed carbon, sulfur content, moisture content, ash content and calorific value, etc.We also need to grasp the following links or factors:

1、the quality of cleaning up.
Some aluminum factories treat it as a waste, while not paying enough attention to how to clean up.Usually a lot of white matter is attached to the scrap，These white substances are mainly electrolytes（Such as ：Na3AlF6、 AlF3、CaF2、MgF2、LiF）.These white substances will play a catalytic role in the combustion of carbon, And increase the consumption of fuel.It directly affects the process control in the process of smelting.At the same time, the residual fluoride is a serious source of pollution.Please see the picture below.

2、Place of storage.
There are two main problems for storing in open about scrap:

1）The surface will show a large amount of white matter if it is stored in a long opencast.The main reason is that The salt in the scrap is dissolved by water and migrated to the surface.Finally, it is deposited on the surface and is white.

2）It is difficult to control the degree of drying when the scrap is loaded.In particular,there is no concrete hardening on the ground in some factories.The scrap is often in direct contact with the earth,It was caused by secondary pollution.

3、the strength of the scrap.
The strength of the scrap has a direct effect on the subsequent melting process.The strength usually depends on the following two aspects: On the one hand the strength and density of the carbon anode, most carbon anode production plants of China use Pot Furnace （the other name: pot calciner） instead of Rotary kiln when the petroleum coke is calcined in recent years.Therefore, the stability of the calcined petroleum coke particles is better, and the porosity of the particles is relatively small.At the same time, most of China’s factories use discontinuous kneading (kneading pan) in the following kneading process.The kneading time is usually more than one hour,So the strength and volume density of carbon anode are higher in China .

Just because of this,The carbon anode can adapt to the continuous expansion of Electrolytic aluminum slot type and the increase of current density in China.
On the other hand, The top of the carbon anode will be severely oxidized if there is a problem in factory management（such as insulation material not covered tightly）,The surface of the scrap is loose when the area of the oxidation is too large and the depth is deeper.It’s also what we usually call“soft scrap”.

4、Are there any other carbonized compounds.